Art is always evolving making new creations. So moosetufting flowers was fun and pretty but needed to challenge the work of art. Doing faces as one of my trademark creations and was a good feeling as I never saw it anywhere else. The most creative  picture came from  teaching native language in school. Needed to do colors and thought of the Chief headdress. Once the design was figured out, the results was astonishing. From there the next creation was women faces but had to figure out the braiding. Braided headbands with the  free flowing hair or braids. Next creation was  the woman sitting there looking up which I like best, a full body form.  Another good picture was the generation picture using three ladies – daughter, mother, and grandmother. The  challenge there was making the lady look older but it turned out really well. The look of three dementional still comes through. It was the hardest to do.

Making the moosetufting flowers were fun needed a new slant so decided to put  porcupine quills as the centre of the moosetufting picture but in tufting form. The quills had to be damp so it  could stitch it tight then sprayed out then cut. This was done with the nest batch of flower picture as and was a hit with people saying it was different.

The next creation was combining all three mediums of art together- moosetufting, porcupine quilling and fishscales in a picture. This was a good idea as the pictures are different than anyone elses, people liked it. The picture shows the Rit dye in all the meduims are the same,  so the Rit dyes are excellent if they are the same colour. An example of this would be the background of this website.

Framing is all different as well, wooden frames, hoop natural wood frames, lacing the picture, or just using matts and then the person can buy their worn frames to match their other pictures.

The creations of art have going all over the world, making people happy knowing it comes from the Yukon made by a First Nation person. 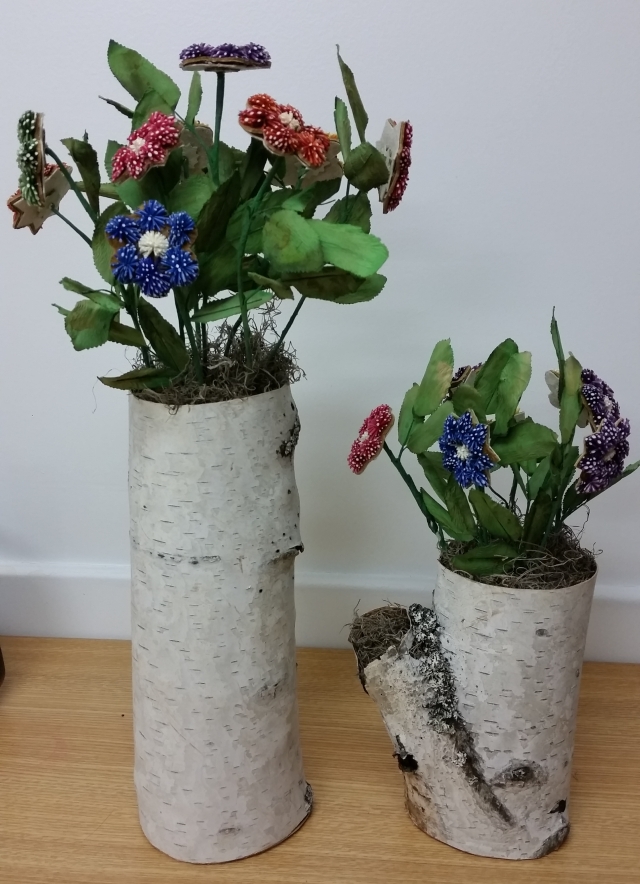